Much to my husband’s dismay I am never far from a book. Since purchasing an iPad it’s made me even closer to a book any time, any place. Heck now I don’t even need a light to read, which only means he can go to bed sooner and I can spend half the night up reading which has been known to happen…almost weekly. It’s so easy for me to get lost in a book and don’t even get me started on a series. If I read one…I have to read them all. This tends to mean a lot of my spare time is spent with my nose buried in a book and it’s truly a blessing that I can read quickly.

This week on my nightstand you would have found A Season for Tending by Cindy Woodsmall. 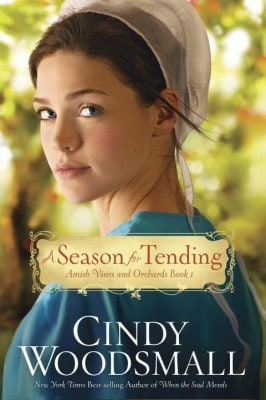 About A Season for Tending by Cindy Woodsmall

In a community where conformity flourishes, seeds of Rhoda’s odd behavior were planted long ago. Can she cultivate her relationships with the same care and tenderness that she gives her beloved garden?

Old Order Amish Rhoda Byler’s unusual gift and her remarkable abilities to grow herbs and berries have caused many to think her odd. As rumors mount that Rhoda’s “gift” is a detriment to the community, she chooses isolation, spending her time in her fruit garden and on her thriving canning business.

Miles away in Harvest Mills, Samuel King struggles to keep his family’s apple orchard profitable. As the eldest son, Samuel farms with his brothers, the irrepressible Jacob and brash Eli, while his longtime girlfriend Catherine remains hopeful that Samuel will marry her when he feels financially stable.

Meanwhile, Samuel’s younger sister Leah is testing all the boundaries during her rumschpringe, and finds herself far from home in Rhoda’s garden after a night of partying gone badly. But Leah’s poor choices serve as a bridge between Rhoda and the King family when a tragic mistake in the orchard leaves Samuel searching for solutions.

Rhoda’s expertise in canning could be the answer, but she struggles with guilt over the tragic death of her sister and doesn’t trust herself outside her garden walls. As the lines between business, love, and family begin to blur, can Rhoda finally open up to a new life? And what effect will this odd, amazing woman have on the entire King family?

My Thoughts On A Season for Tending by  Cindy Woodsmall

Cindy Woodsmall is not a new author to my nightstand by any means.  She is a leader in Amish fiction and I am glad to have come across her writing several years ago.  In Season For Tending we meet Rhoda who has a passion for making things grow but because her “intuitions” she is often avoided in her local community and even a target for harassment.    We also meet the King family and their prize orchard which is having a few rough years.  Throughout Season For Tending we see a dynamic relationship happen between Jacob Kind and Rhoda as well as a slow and steady relationship starting between Samuel King and Rhoda.

In Season For Tending you will be introduced to some very diverse characters who while at the start think they have their lives planned out and on the right path but as the story progresses you will see that proven wrong.  I enjoyed following along with the Rhoda and King saga and will be interested in where the rest of the Vines and Orchards series takes me.  Season For Tending (Book One) does introduce a lot of characters and a few of them are easy to get confused at first.  However, unlike most books Season For Tending does not wrap up at the end in a neat little love story.  Season for Tending will lead you into the remaining books in the series and all the books are linked together and not fully complete until the last in the series.  I feel this is important to take note of because it’s different than most.  Essentially instead of a 300 page Amish Fiction love story you will be looking at a 1,200 page story before all the twists and turns are sorted out.  This makes me say that this series is not for the faint of heart.  I enjoyed the novel very much and have already started the second in the series (because I have to read the whole series once I start one) however I was expecting one characters lives to be settled before starting into another characters.  This is what made it hard when so many characters were introduced at once because I spent my time reading and wondering how it was all going to be wrapped up by the end of the book.

As Season For Tending left off I am left wanting to know more.  How does the new Amish community hold up in Maine?  Can Samuel make the new orchard produce to help keep the old orchard alive?  Which King will Rhoda chose?

Purchase A Season for Tending by  Cindy Woodsmall

You can purchase your own copy of A Season for Tending by Cindy Woodsmall at Barnes and Noble, Ebay, Amazon or various local retailers.

What is your favorite genre to read? Can we find a book on your nightstand? If so what is it? Last good book you read?

I purchase most of my books through Barnes & Noble or Amazon because it’s easy to have them delivered wirelessly instantly. I can’t stand to wait on a good book! 🙂

Thank you Jonna for the finishing touches on this