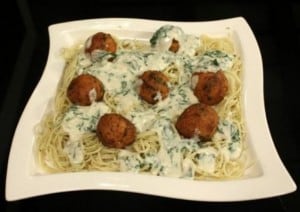 Sure you’ve already tasted a variety of Italian foods. But, did it ever cross your mind to experience a mixture of cuisine? Would you love to have a taste of a combination of Italian and Indian food? If so, then it will be a great idea to prepare a Baked Spaghetti with Cheese Balls in Spinach Sauce. This is a combination because spaghetti is famous Italian pasta and the cheese balls are made from cottage cheese or Paneer, which has its origin in India.

The recipe can make up to 4 servings and takes 1 ½ to 2 hours to cook. The best part about this recipe is that most of the ingredients can be found at home. You need not choose raw materials. So, without further ado, here is the recipe of the sumptuous baked spaghetti with cheese balls in spinach sauce.

Preparing the Ingredients for Baked Spaghetti With Cheese Balls

Heat the 1 tablespoon of butter in the pan. Put the onions. Saute until they become translucent. Set aside.

After, put the green chilies, salt, and spaghetti. Mix well. Cook for around one minute.

In preparing the white sauce, heat a tablespoon of butter in the pan. Put the flour. Cook on a low fire. Continuously stir until froth comes out. Then, gradually put the milk and continue stirring until the sauce becomes thick. Add pepper and salt to taste.

After, the white sauce, combine the chopped and blanched spinach, cream to a puree. Put pepper and salt to taste.

Marinate the sliced bread in the curd for about ten minutes.

Grind the cottage cheese or Paneer and pound it finely.

Combine everything well and mold into balls. Then, deep fry the molded balls until they become golden brown. Drain and set aside.

Mix the spinach sauce with the spaghetti and mix evenly. Then, put the mixture on the greased baking pan and place the cheese balls on the top. Sprinkle some cheese on the top and bake it in a pre-heated oven at 200º C for 20 minutes. And serve hot.

Here they are. An easy to do and step by step method of cooking the baked spaghetti with cheese balls in spinach sauce. But, keep in mind not to bake it too much because the cheese balls that are already deep dried will harden. However, enthusiasts of Italian and Indian food will surely love the spinach sauce as it offers an exceptional taste to the pasta. A mixture of cottage cheese and spinach makes this recipe healthy as well. Lastly, you can serve this recipe on any occasion that you like

Author Bio:- Sunny Popali is SEO Director at http://tempocreative.com. Tempo Creative is an Arizona Inbound Marketing firm that has served over 700 clients since 2001. Tempo’s team specializes in digital and internet marketing services including web design, SEO, social media and strategy.

Harvesting at sunset! 1 more night before the free