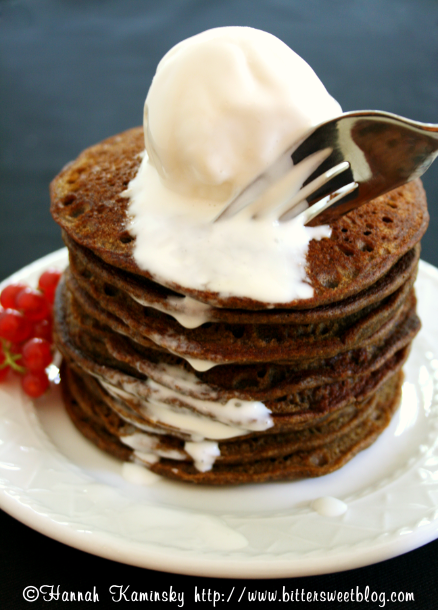 Seeking a more hearty variation to the generally light and fluffy pancake, I rifled through my overwhelming assortment of flours until the ancient package of buckwheat came to light. Buckwheat definitely says “satisfying” to me, and by using the flour to create pancakes, you get not only a filling and more healthy meal, but a delectable one, too. Despite the misleading name, buckwheat is gluten-free as well, so it made sense to leave wheat out of the picture altogether for this one. Toss in a few roughly chopped almonds or walnuts if you’d like to further enhance the naturally nutty flavor of the buckwheat.

As for me, well, a scoop of vanilla ice cream sounded like a more appealing addition. Melting luxuriously over the top of a tall stack, the contrasts of hot and cold, light and dense, simple and complex flavors made for a much more exciting dinner/dessert combo than I could have imagined.

Heat the non-dairy milk briefly just to bring it up to room-temperature if it had been in the fridge, and stir in the lemon juice, sugar, and molasses. Set aside.

In a large bowl, sift together all of the flours, yeast, baking powder, salt, and cinnamon, making everything is well mixed and evenly distributed. Pour your wet ingredients into the bowl of dry, along with the oil, and stir with a wide spatula until just combined. Small lumps are just fine, so long as you don’t over-mix the batter.

Heat a large skillet over moderate heat, until you can get a drop of water to skitter around on top. If it instantly evaporates, it’s too hot, and if it doesn’t do anything, it’s too cold. Drop about 1/4 cup of batter on the skillet per pancake, but don’t crowd the pan because it will become difficult to flip them. When a good number of bubbles break on the surface of the pancake, carefully check the underside to make sure they’re ready to flip. It should take about 3 – 5 minutes per side, so just keep a good eye on them and don’t walk away. Stack them on a plate and cover with a kitchen towel to keep warm for a few minutes before serving.
Serve with maple syrup or vanilla ice cream if desired.

**Post and recipe are from Bitter Sweet with permission from Hannah.  Check out the variety of options that Hannah has avalable on her site including White Chocolate / White Chocolate Mousse, Rocky Road Bars, and Pan de Mie to name a few!**