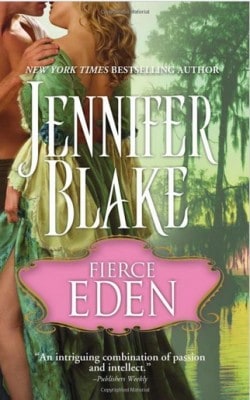 About Fierce Eden by Jennifer Blake

What has he done with his devil’s bargain…?

Reynaud, of both French and Natchez Indian blood, endures a deadly slur from the lovely widow, Elise Laffont. Because of it, he demands she become his bedmate in return for saving her and her friends during a dangerous uprising. How was he to know she dreaded a man’s possession?

Elise expects the same brutal treatment from the half-breed brother of the ruler of the Natchez that she received from her dead husband. Instead, she is presented with a dubious bargain: Reynaud will not touch her–as long as she explores his magnificent body each night instead.

Their sensual pact turns to fiery desire, forging a bond as tender as it is strong. But the war between French and Natchez escalates, forcing desperate choices between honor and duty, loyalty and love.

My Thoughts On Fierce Eden by Jennifer Blake

By this time it’s no secret that I love historical romance and when I can snag them for free it’s even better.  As I was looking for a new book to read I stumbled upon the first boxed set in the Louisiana History Collection by Jennifer Blake for free.  Hard to pass up especially when the second set in the series is on sale for $3.99 as well, which means I received 7 books for only $3.99, yep not going to pass that up.

To be honest I didn’t even read the back of the book before I actually started the book, which is nothing unusual as I usually pick up a book based off it’s title or cover photo.  I wasn’t sure what I expected when I started reading Fierce Eden but wasn’t expected to be taken back to the time before the Louisiana Purchase, way before.  I was taken back in time to when the Natchez Indians roamed the land.

Fierce Eden started out with the main character widowed Elise at a dinner party with a man she despises, yet he rules the Fort where she lives and she needs a favor to be able to continue to run her farm.  During the dinner party Reynaud comes unexpectedly to give the man in charge a warning of an attack that is going to happen by the Indian nations combining.  Reynaud’s warning is brushed off and after being insulted by Elise under her breath he leaves.  As the attack happens Elise and 4 others are spared by happenstance and Reynaud makes a pact to take them to safety if Elise will share his bed during the trip, sort of as payback.

I was quickly taken through the back trails of Louisiana in Fierce Eden and found myself wrapped up in learning the history of an Indian tribe that I had yet to ever hear about (or at least recall anything about).  Be forewarned that Fierce Eden is filled with some pretty steamy scenes as Reynaud teaches Elise the art of lovemaking, an art that she had grown to hate because of her dead husbands obtrusive ways.

I enjoyed reading Fierce Eden and learning a ton history along the way of a modern day state that I knew very little about.  Fierce Eden made for a good read that left me wondering where the other 6 books in the series would take me.

You can purchase Fierce Eden by Jennifer Blake individually on Amazon or as a boxed set.  The first Louisiana History Collection boxed set is showing a price of $2.99 right now on Amazon which is not a bad price for 4 e-books delivered directly to you device in minutes.

Harvesting at sunset! 1 more night before the free