The Garden Series from Cynthia Wicklund 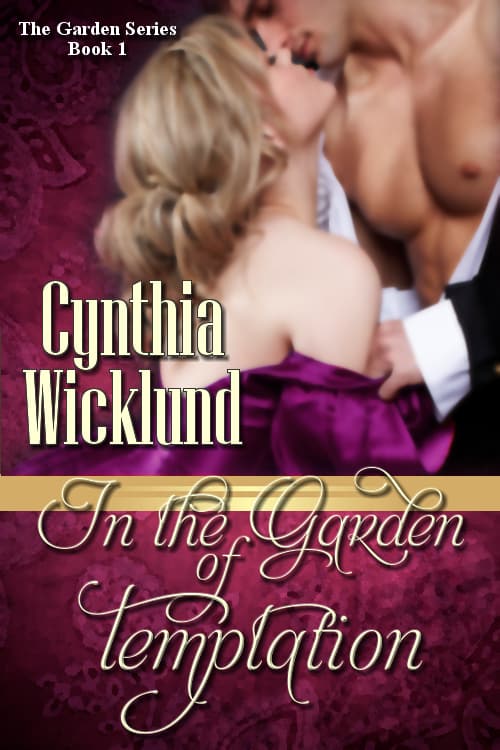 It’s widely known that  I am never far from a book. Since purchasing an iPad it’s made me even closer to a book any time, any place. Heck now I don’t even need a light to read, which only means my husband can go to bed sooner and I can spend half the night up reading which has been known to happen…almost weekly. It’s so easy for me to get lost in a book and don’t even get me started on a series. If I read one…I have to read them all. This tends to mean a lot of my spare time is spent with my nose buried in a book and it’s truly a blessing that I can read quickly.

About The Garden Series from Cynthia Wicklund

In the Garden of Temptation—Adam Stanford always does the right thing, but when he meets Catherine Bourgeault honor and gentlemanly conduct are forgotten. He’ll risk his reputation and all he holds dear to possess this amazing woman. However, what seems like a straightforward effort to purloin another man’s wife is fraught with deceit and the dark secrets of a demented man who’ll do anything to save his empty marriage.

In the Garden of Seduction—Cassandra James is in for a terrible shock. She is not who she thinks she is, never has been. One morning she awakens to find the neat order of her wealthy, middle class world changed forever. Add to this the complication of Simon Fitzgerald, Marquess of Sutherfield. A handsome rogue at his most intriguing, he pursues Cassandra with single-minded determination, but his motives are not pure. He wishes to bed the lady, not marry her.

In the Garden of Disgrace—When 17-year-old Lady Jillian Fitzgerald sneaks out to spy on a duel, she believes she is merely guilty of an indiscretion. But when the duel takes a deadly turn and Jillian becomes an unwilling passenger in the fleeing carriage of the infamous “Lord Wicked,” she knows what began as a lark has become a disaster. One night of bad judgment and her life is changed forever.

In the Garden of Deceit—Simon Fitzgerald’s nephew James Tremont is in a predicament. He’s inherited a run-down estate, a house full of eccentric relatives who are depending on him for support, and a bank account that has plunged into the red. The answer to his financial woes arrives in the oh-so-common person of Archie Campbell, a wealthy man who wants to give James a helping hand. But Archie’s money comes with a stipulation. James must marry Archie’s daughter Amanda, and he must do so without letting the young lady know she is entering into an arranged marriage. Thus James is pulled into a web of deceit, a lie that will come back to haunt him and endanger the very thing that means more to him than life itself.

Visit “The Garden” again where love and passion await…

My Thoughts On The Garden Series from Cynthia Wicklund

What I love about most historical fiction stores that I share with you is the fact that their is one strong headed female who goes against the grain of the ton and of course a love story that is filled with constant tension.  I know this it what drives me to read more and see how they will eventually end up together, because we all know they will.  The tension that Cynthia incorporates into her books kept me up all night long needing to know how the two lovers would end up together.

What is your favorite genre to read? Can we find a book on your nightstand? If so what is it? Last good book you read?

I purchase most of my books through Barnes & Noble because it’s easy to have them delivered wirelessly instantly. I can’t stand to wait on a good book! 🙂

You can purchase your own copy of The Garden Series from Cynthia Wicklund at Barnes and Noble,  Amazon or various local retailers.