About Wedded To War by Jocelyn Green

Tending to the army’s sick and wounded meant leading a life her mother does not understand and giving up a handsome and approved suitor. Yet Charlotte chooses a life of service over privilege, just as her childhood friend had done when he became a military doctor. She soon discovers that she’s combatting more than just the rebellion by becoming a nurse. Will the two men who love her simply stand by and watch as she fights her own battles? Or will their desire for her wage war on her desire to serve God?

Wedded to War is a work of fiction, but the story is inspired by the true life of Civil War nurse Georgeanna Woolsey. Woolsey’s letters and journals, written over 150 years ago, offer a thorough look of what pioneering nurses endured. This is the first in the series “Heroines Behind the Lines: Civil War,” a collection of novels that highlights the crucial contributions made by women during times of war. 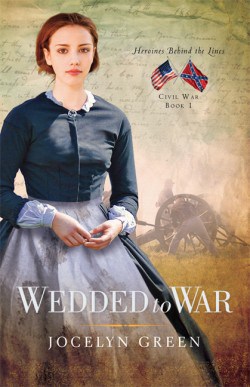 My Thoughts On Wedded To War by Jocelyn Green

The Civil War was a trying time in this country and one that makes the basis for a really good book. Wedded To War by Jocelyn Green fell into this category. A book filled with small peeks at history and what life was like on a couple fronts of the war, the most prominent was Charlotte’s.

Charlotte is convinced she wants to help on the war front and sitting at home knitting is not what she has in mind. Charlotte takes herself to the front of the war by becoming a nurse which was no easy task for a women in those days. Chaperoned by her sister who is following her husband, Charlotte finds herself in some down right “icky” situations but proves to the world that women can handle the gruesome job.

Charlotte and her sister befriend Ruby along the way as Ruby tries to run from her past and make a future for her and her unborn child, unsure if her own husband is going to survive the war.

Journey along with Charlotte as she and her sister, Ruby and Dr. Lansing bring realities of war during this time to the fore front and follow this group of people who strived to make a difference, possibly even find love along the way between a couple and a mother and child.

You can purchase your own copy of Wedded To War by Jocelyn Green at Barnes and Noble, Ebay, Amazon or various local retailers.