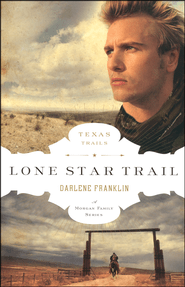 From the Back Cover Of Lone Star Trail

A man faced with losing what he’s sworn to protect.

The Texas Republic poised to become the Lone Star State.

Jud Morgan’s father died for Texas’s freedom, so when German immigrants try to colonize a New Germany in Texas, he takes a stand against them.

After Wande Fleischer’s fiancé abandons her, the young fraulein determines to make a new life for herself in Texas. As much as Jud dislikes the German invasion, he can’t help admiring Wande. Will vengeance burn and destroy more than Wande’s home, or will the rancher put aside his prejudice and forge a new future?

Doubt meets hope, and fear gives way to faith in the Morgan family.

My Thoughts On Lone Star Trail

I downloaded Lone Star Trail as a freebie offered on Amazon and when I went looking for something to read the cover and title caught my eye. To be honest I hadn’t even read the back of the book when I started reading. With the availability of the free books on Amazon this is not an uncommon thing for me and once again I wasn’t disappointed. The only problem is that the Lone Star Trail is one of six books, which means that I have five more that I will be updating you about in the weeks to come.

I love historical fictions book and the Lone Star Trail is no different. What I did find different about the Lone Star Trail is that is wasn’t about the struggle between the whites and the Indians, it became about the struggle of the German immigrants.  This change of events was a welcome pace for me and I learned a few things along the way.  I never would have thought about the Germans immigrating and landing in Texas during this time period, in my own mind everybody ported in the East and made the hard journey West.  A research project is beginning for me now as i want to know more about this part of history.

Darlene did a good job relaying what Jud and Wande were going through and the thoughts happening in their heads.  I could sense what Wande was going through and feel the struggles that Jud was having.  I loved being able to see Mrs. Morgan as the strong head of the family that she was.  She raised her family after her husband’s death during the war and she remained  strong throughout it all.  She taught her children to be strong, polite and to listen because she wasn’t afraid to tell it like it is.

I can’t wait to read the other five of six in the Texas Trail series written by three authors, Darlene Franklin, Vickie McDonough, and Susan Page Davis.

You can purchase Lone Star Trail via Amazon in paperback, hardback or kindle edition.

« Seeing The Good In Everything With Good Life From Allstate

My oldest leaves notes like this on the bottom of

Planning out our next unit study that the boys hav