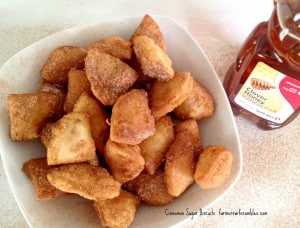 Growing up we when we would go camping my mom would always take biscuits and “fry” them in shortening in her dutch oven.  It left them with the outsides being cooked and insides still a little raw.  Our family loves raw dough of any kind really (especially cookie dough, so bad I know) so of course something like this was a guarantee on the menu plan.  The one thing I never really seemed to care for was that usually my mom burnt them, oh the joys of cooking over a campfire.

These fried biscuits are most certainly an improvement on the campfire cooking and are fixed up with cinnamon and sugar.  Serve these delicious bite size morsels with either a side of honey, strawberry or fudge sauce and an empty plate will be left in the wake.  Of course serve them warm for the best flavor, I have found that you can keep the Cinnamon & Sugar Biscuits warm in your crock pot for a couple of hours before they get tough.  What a unique treat to serve at your next backyard BBQ or brunch.  Be aware though that one package of “pop” biscuits makes 64 bites. 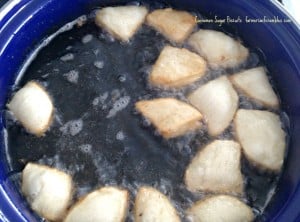 The Cast Of Cinnamon Sugar Biscuits

1. Fill a frying pan with 2 inches of oil. These don’t take long to fry so you don’t need a large pan but one that you can maneuver the pieces around in to turn them.  I generally use an inexpensive deep fryer, that doesn’t even have a temperature setting but it keeps me from wasting my oil each time.

2. Heat your frying oil over medium-high heat (I would guess to 350 degrees but I did the sizzle test, does it sizzle when your dough is placed in). Real scientific I know…

3. While your oil is heating you will want to prepare a plate with several layers of paper towels so that you will have a place to put your cooked pieces to absorb some of the oil and cool off.

4. Prepare your biscuits by pulling them in half (the flaky layer biscuits work the best) so that you have two round circles. Then I cut my circles into fourths. This gave me 8 pieces from each biscuit.

5. Drop pieces individually into hot oil and cook until golden brown turning half way through your cooking time. Mine took about a minute on each side.

6. Remove from hot oil and move to your paper toweled plate. Sprinkle with cinnamon and sugar mixture.

7. Repeat until all 64 pieces are cooked and serve warm with honey or and ice cream topping like fudge or strawberry.

Do you have a favorite camping food that brings back memories like my Cinnamon Sugar Biscuits?

When you’re the last one out of the parking lot

I went to college for years to achieve a teaching