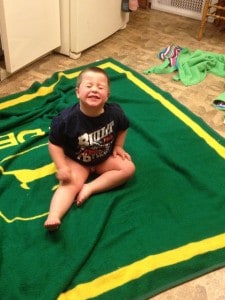 Wow as mom’s (and dad’s) we all have guilt about our kids.  I mean I don’t care about what the other kids are wearing not I do freak out that my kid doesn’t have his own iPad at almost 5 but I do feel guilty when I get upset with my kids, when I am the reason for that happening.

It’s been a crazy week in our house and my 4 year old still needs naps most everyday.  Long naps or the sweet kind-hearted little boy disappears and some monster who I don’t know comes out.  I know I am not alone here right?  We all see that child and think he isn’t ours where in the world did that come from!

The busy week of no naps has caught up to Coulter and we are both paying the price.  This makes me feel guilty because like tonight it is my fault.  I made him take a really good nap today to try and stop the monster from coming out, but with the crazy week we have had one nap just wasn’t enough.  As I pick Coulter up for school his little 4 year old mouth is just running a mile a minute and not very nicely.  He is attempting to tell me how it is going to be and well that just isn’t going to happen (boy that sounds snotty).

Coulter knows full well that I will warn him of what he is doing wrong and a punishment and that he has to the count of three.  That’s it.  3.  The order of that number doesn’t change and yet he still doesn’t understand it.  I will admit to the world we spank when it is warranted.  For Coulter it really grabs his attention and generally one is enough to whip the attitude around.  Not today.  Before we even make it the 15 miles home from his school he has earned himself three spankings.  Does it stop there?  Oh no, he really just has to keep going and earn himself two more; then off to his bedroom to cool off, for both of us. 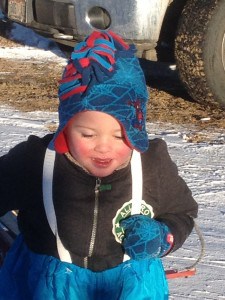 Phew that will give an attitude adjustment and we can go on about our day.  We have a big evening planned and I would love for it to go off without a hitch.

After a 2.5 hour nap I am thinking yes this is going to make for a great night.  Oh boy was I wrong.  As we load up in the car to head off to swim lessons the boys start fighting about what towel they are going to get.  I calmly explain that Corbin is going to get the pirate towel from Kidorable and Coulter can have the dragon towel.  The pirate towel is to small for Coulter, but that just isn’t good enough for him.  He wants that towel and he is going to get it (or so he tells me).  I try to reason with him but it’s just not going well, 20 miles into the drive we have to pull over for yet some more spankings along side the road and the threat that if he continues to run his mouth he will not get to swim today.

He didn’t get to swim.

Well I should have just called it all quits here.  Just went back home and called it a day, but nope.  I didn’t.  I promised Corbin swimming and dinner at the neighbor’s house.  I can’t punish Corbin for Coulter’s bad behavior can I?  We go, we have dinner, we play amazingly well and then it becomes time to pick up and go home.  The break down happens and the monster Coulter comes out.

I knew he was tired but I really wanted to see our neighbor that I haven’t seen in awhile.  I really wanted to watch our boys play together.  So I pushed Coulter past the breaking point of no sleeping and expected things to go well.  When they didn’t we both get upset with each other and my 4 year old does it by yelling.  The guilt sets in when I feel like I must punish him for his attitude and rude behavior, but then I have to stand back and think… I put him here.  This is my fault, but surely I can’t let this behavior slide? 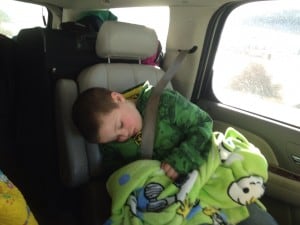 In the end I know this was my fault so I do let slide partially.  I agree with myself to keep the mommy guilt at bay and just put the kids to bed without the hiding game.  It makes him upset that we didn’t play and it makes me feel like he was punished, plus it shaves 15 minutes off of getting him into bed.

This is what makes me feel guilty, knowing full well I put him in the position to be tired and upset.  I knew it really wasn’t going to end well, but I did it anyway.  Then when he isn’t a perfect little angel I expect, he gets punished.  That surely isn’t fair on his part.

What is your mom guilt moment?

Get Cooking With Homemade Cream Of Mushroom Soup »