Tess, an aspiring seamstress, thinks she’s had an incredibly lucky break when she is hired by famous designer Lady Lucile Duff Gordon to be a personal maid on the Titanic’s doomed voyage. Once on board, Tess catches the eye of two men, one a roughly-hewn but kind sailor and the other an enigmatic Chicago millionaire. But on the fourth night, disaster strikes.

Amidst the chaos and desperate urging of two very different suitors, Tess is one of the last people allowed on a lifeboat. Tess’s sailor also manages to survive unharmed, witness to Lady Duff Gordon’s questionable actions during the tragedy. Others—including the gallant Midwestern tycoon—are not so lucky.

On dry land, rumors about the survivors begin to circulate, and Lady Duff Gordon quickly becomes the subject of media scorn and later, the hearings on the Titanic. Set against a historical tragedy but told from a completely fresh angle, The Dressmaker is an atmospheric delight filled with all the period’s glitz and glamour, all the raw feelings of a national tragedy and all the contradictory emotions of young love. 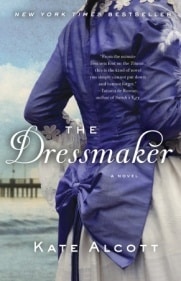 My Thoughts On The Dressmaker

I rarely read the backs of books before I decide to read them. To me a cover is worth a thousand words and the cover of The Dressmaker appeared to be right up my alley. The quick glance I did give it told me it would be during the Titanic time period.

The start of The Dressmaker had me wrapped up in it, but it shortly became one of those books that is a good read and worth my time but was easy enough for me to put down to take care of my daily chores.

I was drawn into knowing about the trial that took place right after the survivors were brought to shore and learning some of the facts about the titanic, for instance that 2/3 of the survivors were upper-class. I knew that of course that was the majority but never realized just how high.

I also didn’t realize that such a trial really even took place (clearly not a well covered subject in high school) so it was interesting to see the direction that it took and learning about some of the survivors besides unsinkable Molly Brown. Not that she is not someone to be revered but The Dressmaker brought in others testimonies and sides.

Would I read The Dressmaker again? Probably not as it didn’t totally enthrall me but I would recommend it to others. It was not a bad book but not the best I have read from Kate Alcott.  I am glad I checked it out from the library rather than purchasing it.

Purchase The Dressmaker by Kate Alcott

You can purchase your own copy of The Dressmaker by Kate Alcott in a variety of formats on Amazon and Barnes & Noble.